Growth responses to water deficit translate into discernible changes in the structure of woody tissues and provide an integrated record of historical water availability throughout the life of the individual. The highly dynamic nature of woody growth can impart adaptive changes in physiological performance through changes in xylem elements that regulate water transport. Here, we present a case study of how sapwood anatomical properties can be mapped using point dendrometers, in a diffuse porous, Eucalyptus spp. to reveal plasticity in hydraulic architecture under water deficit. Reductions in stem growth in response to water deficit coincided with marked changes sapwood vessel anatomy that could be matched to the commencement of large fluctuations in stem radius. These changes included: a reduction in hydraulically-weighted vessel diameter, increases in vessel density, sapwood lumen fraction and density and increase in wall strength. However, no changes in estimated stem conductivity were observed during the water deficit. This approach emphasises the responsiveness of species such as Eucalyptus to changes in water supply and provides an illustration of how we might detect short-term and rapid changes in stem hydraulic architecture in response to water availability and other environmental controls.

The dynamic response of woody species to water availability includes several lasting changes in their structure and function. Growth responses to water deficit translate into discernible changes in the structure of woody tissues and provide an integrated record of historical water availability throughout the life of the individual. While inter-annual and seasonal variation in stem anatomy and other chemical properties may provide surrogates for reconstructing climatic water availability over decadal scales and longer (), the finer scale patterns in woody growth reflect plasticity in physiological performance through changes in xylem elements that regulate water transport. These shorter-term changes (days to months) in xylem anatomy may facilitate whole-plant changes in hydraulic functioning that ensures homeostasis of water status and potentially enhanced resistance to severe hydraulic damage.

Mapping finer scale dynamics in wood properties has advanced significantly in the past two decades, with approaches capable of linking sub-daily patterns in radial growth (using point dendrometers) () to the wood properties of the corresponding tissues (SilviScan) () at the time they were formed (). While these mapping approaches have elucidated environmental drivers of wood properties relevant to timber and pulp production (), the relevance of these changes in sapwood anatomy to plant hydraulic architecture has received less attention. A fine-scale temporal record of xylem formation can be related to other relevant ecophysiological attributes across the plant that reflects changes in hydraulic regulation such as gas exchange. Here, we present a case study of how sapwood anatomical properties can be mapped over the course of a short-term (12 weeks), chronic water deficit treatment, to illustrate the potential for this approach in understanding hydraulic plasticity in woody species.

The data for sub-daily changes in stem radius and stem hydraulic properties where obtained from a chronic water deficit experiment detailed in . Briefly, a chronic water deficit treatment was imposed on six, two-year old Eucalyptus globulus saplings (six well-watered saplings as controls) and maintained for ~12 weeks. The watering regime for the drought-treated saplings was designed to induce water deficit gradually and moderate water deficit intensities just above or below stomatal closure (). Three individuals from each treatment were instrumented with point dendrometers, which measured stem radius (over bark) every 5 mins (see for details). Changes in stem radius were monitored for ~ 3 weeks prior to the imposition of the water deficit and continued throughout the experiment. Leaf water potential at pre-dawn and midday was measured approximately every two weeks as detailed in .

Stem hydraulic properties were collected on all three individuals per treatment at the end of the experiment. Stem samples (radial slices ~10 mm wide) were taken at ~0.15 m above the soil surface from radial profiles across the entire stem that aligned with the placement of the dendrometer point and attachment rod (on instrumented trees). The sampling of the sapwood was done to enable scaling of changes in sapwood vessel anatomy to the high-resolution stem radius data (see ). Transverse sections were made on stem samples (two per individual) using a freeze-microtome (20 – 30 µm thickness) that included the entire radial profile of the sapwood formed during the experiment. Intact stem sections were stained with toluidine blue, rinsed and mounted on slides with phenol glycerine for microscopy. Digital images of sapwood material were made using a compound light microscope and digital camera at 100 x (Carl Zeiss Inc., NY) across these radial profiles and the sapwood hydraulic properties were computed using imaging software (Image J, 1.32J, USA Institutes of National Health).

To define differences in hydraulic properties during the experiment, each radial profile was partitioned into three radial segments (and corresponding time periods) of interest; pre-treatment (mid point at 1 day of water deficit), first half (mid point at 35 days or 5 weeks of water deficit) and second half of the treatment (at 69 or 10 weeks days of water deficit). Hydraulically weighted mean vessel diameter (∑d5/∑d4) (), vessel density and lumen fraction was calculated on each radial segment (n > 50 conduits). Wall strength or level of reinforcement was estimated from the relationship between wall thickness (t) and the average of the maximum and minimum diameters of each lumen (b), using (t/b2) (). These calculations involved finding vessel pairs that were separated only by wall material. (n > 5 per segment) This has been shown to scale with resistance to cavitation among different species (; ) and was used to infer potential changes in vulnerability to cavitation in the sapwood. Estimated total conductivity per stem cross-sectional area (Ks) was calculated following using: Ks α F1.5 S0.5, where F is the lumen fraction and S is the vessel size (cross-sectional area) multiplied by vessel density. Sapwood density was determined on samples directly below those used for sapwood anatomy measurements and each radial slice was carefully divided into sapwood formed during the experimental treatment and older sapwood. Differences in mean leaf water potential and sapwood hydraulic properties were tested using a two-way ANOVA using treatment and radial segment/time period as factors (P < 0.05). Differences in sapwood density between treatments were evaluated using a student’s t-test (P < 0.05). 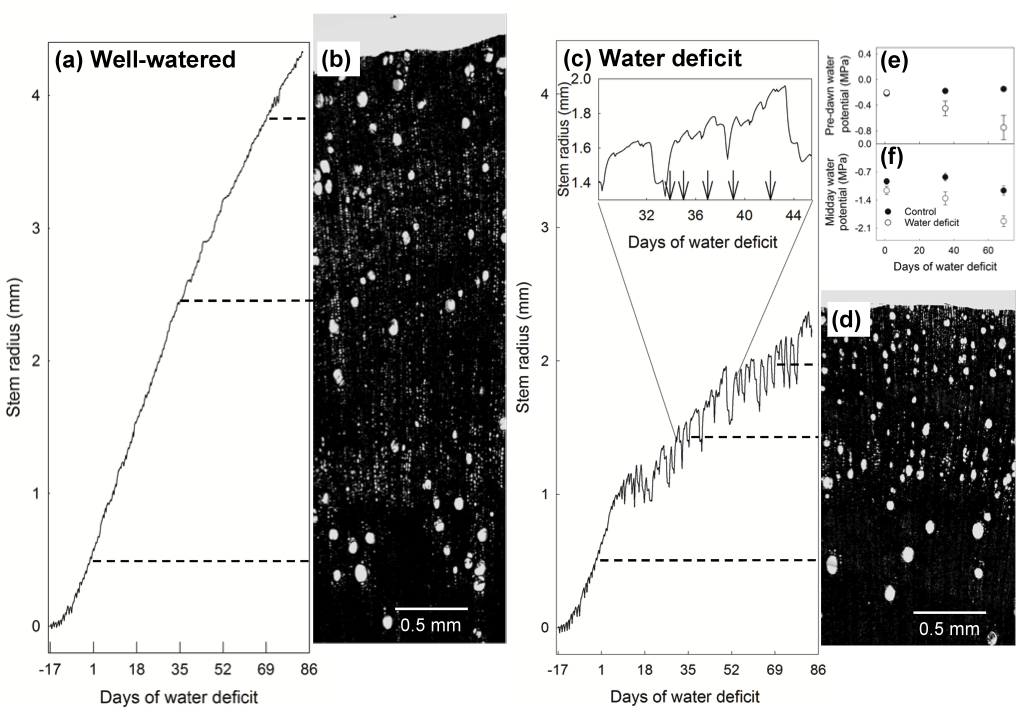 Figure 1. An example of the approach for mapping sapwood hydraulic properties using high-resolution stem radius measurements and sapwood radial profiles for trees exposed to well-watered (control) and water deficit conditions. Stem radius changes (at 15 min intervals) in (a) control (well-watered) and (c) water deficit treatments. The inset in (c) highlights the rapid response of stem radius to re-watering events (denoted by the arrows). The corresponding sapwood radial profile scaled to match the radius data for (b) control (well-watered) and (d) water deficit treatments. The dashed lines denote the mid-point of the three radial segments analysed for sapwood anatomy. Mean (± 1 s.e.) (e) pre-dawn and (f) midday leaf water potential for the three time periods (corresponding to the dashed lines in (a) and (c)).

This case study provides an illustration of how we can evaluate fine-scale plastic responses in stem hydraulic architecture to water deficit. This approach has the potential to identify the key triggers of functional changes in the xylem of woody species particularly in species such as Eucalyptus where their indeterminate growth and lack of distinguishable growth rings make understanding environmental controls of growth and hydraulic architecture very challenging. This information would also complement recent advances in measuring and imaging xylem properties such as X-ray microtomography (micro-CT) that can map variability in cavitation resistance within and between different regions of growth ().

Changes in sapwood anatomy in E. globulus saplings was evidenced by significant shifts in vessel dimensions and configuration, illustrating changes in xylem structure can occur within days of the plant experiencing changes in water status and a slowing or cessation of growth. The dependency of developing cells within the cambial zone on water potential and hormonal changes translates into a slowing of vessel expansion and wood formation during water deficit (). As water deficit intensified in this study, expansive growth ceased intermittently and resumed upon re-watering (Figure 1c). A large proportion of the transient declines in stem radius was likely due to shrinkage of bark tissues (Figure 1c), however over multiple phases of shrinkage and enlargement, expansive growth and subsequent changes in xylem radius could be distinguished by a sustained radial increase despite these short-term fluctuations. The resultant impact of reduced expansive growth on sapwood anatomy in angiosperms tends to be smaller vessels, a denser configuration of vessels that generates higher sapwood density (; ). However, these anatomical changes in response to water deficit did not translate into marked reductions Ks during water deficit treatment (Figure 2e) indicating the reductions in vessel diameter were compensated for by increases in vessel density and sapwood lumen fraction. This suggests that some maintenance of sapwood-specific conductivity is maintained across xylem tissue despite significant alterations in the configuration and size distribution of the vessel elements. 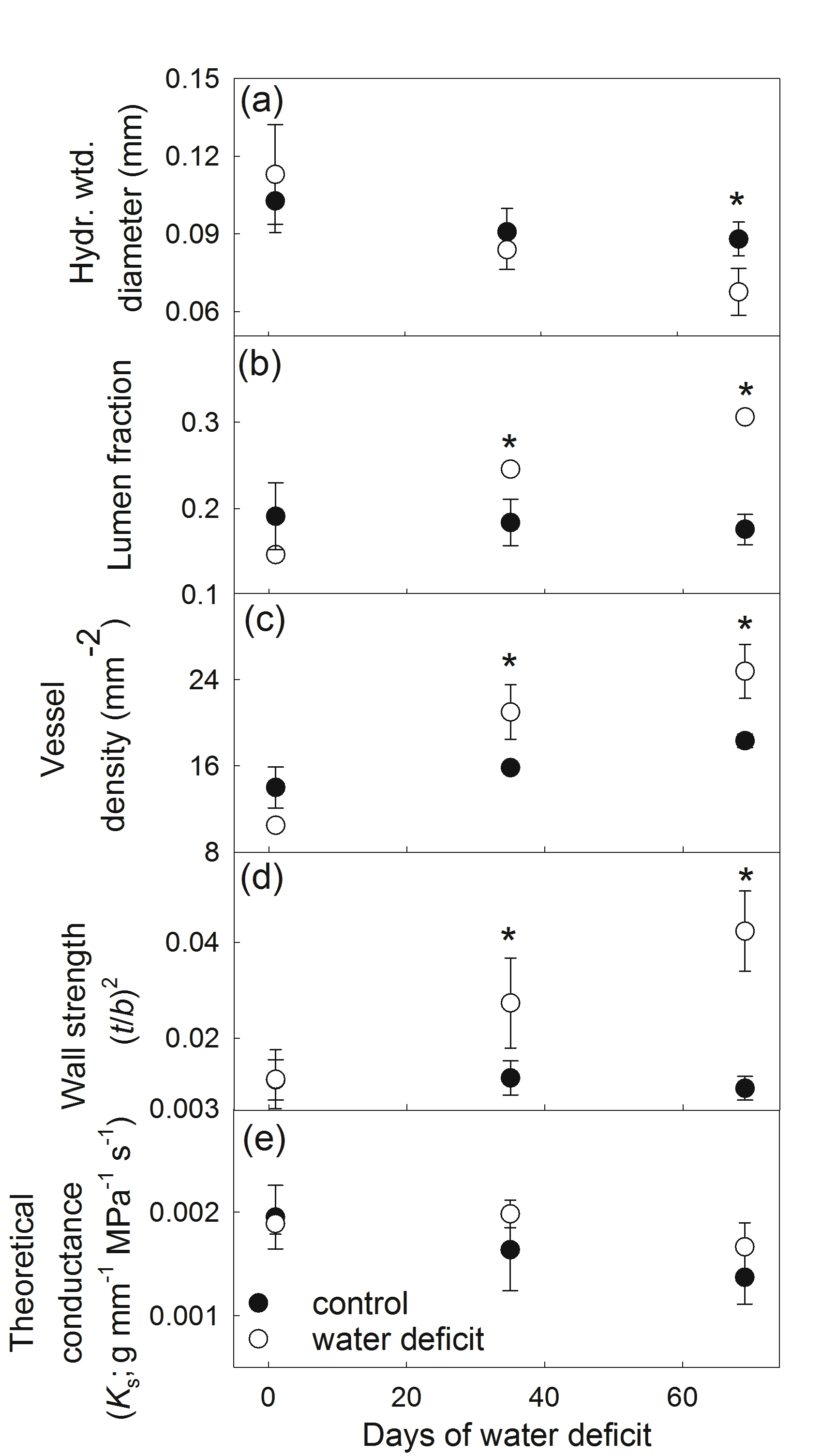