Drought-induced tree mortality has received much attention in the recent past. McDowell et al.’s (2008) hydraulic framework links tree hydraulics with carbon dynamics and proposes two non-exclusive mortality mechanisms: carbon starvation (CS) and hydraulic failure (HF). CS is often referred to as the (partial) depletion of non-structural carbohydrates (NSC) in response to stomatal closure, reduced C assimilation and sustained C storage dependency during longer droughts. HF describes a lethal level of xylem dysfunction from runaway embolism during severe droughts. While HF can be readily inferred from the percentage loss of conductivity in vascular tissues at the time of death, CS is much more difficult to assess.

Starvation is usually defined as a lack of food leading to suffering or death. In plants photosynthetic sugars play many functional roles, not only as a source of catabolic energy. For example, sugars are important for osmotic regulation of cell pressure and recent studies suggest a potential link between xylem parenchyma sugars and embolism repair following drought. Hence, carbon limitation could have a direct impact on tree hydraulics and HF; however, empirical evidence for such a mechanism is still inconclusive.

Although HF appears to be predominant during drought mortality, our limited understanding of the roles of NSC in hydraulic function precludes any premature refutation of CS as a mechanism in drought-induced tree mortality.

Plant carbon dynamics during drought - no water, no carbon

Recent observations of increased drought-induced tree and forest mortality across the globe (e.g.,; ) have incited a wave of investigations on the underlying causal mechanisms (). Even under non drought conditions, plants have to spend hundreds of molecules of water for each molecule of carbon dioxide they assimilate (). In vascular plants stomata play a critical role in regulating this exchange. When soil water availability is reduced, root signaling via phytohormones cause stomatal closure as a means to decrease water loss via transpiration (). However, stomatal closure also reduces CO2 diffusion into the leaf and hence carbon assimilation. It is therefore no surprise that the plant carbon balance is tightly coupled with its water balance.

hydraulic framework employed this relationship to explain how drought severity and drought duration, in interaction with a species’ stomatal behavior and its capacity to maintain a minimum water potential, may lead to either hydraulic failure (irreversible xylem dysfunction, HF) or carbon starvation (CS), i.e. insufficient carbon supply to meet a plant’s demand for both osmotic and metabolic functioning (). An anisohydric (aniso = unequal, hydric = relating to moisture) species, i.e. a species that can maintain very low water potentials during drought, would also experience very low xylem water tension with the threat of cavitation and run-away embolism during a severe drought – and hence may die from HF. On the other hand, more conservative (isohydric) species that cannot maintain very low water potentials during drought would face sustained reductions in carbon assimilation during longer droughts and may then have to rely on stored carbohydrates (or other stored carbon compounds) until these are depleted – and would die from CS.

Carbon starvation - what exactly does that mean?

Merriam-Webster® online dictionary defines starvation as “suffering or death caused by having nothing to eat or not enough to eat: the condition of someone who is starving”. Plants produce their own food during photosynthesis in form of sugars like glucose. While drought reduces stomatal conductivity and hence glucose production, plants usually store large amounts of carbon compounds and hence do not suffer immediately after the onset of drought. On the other hand, glucose and other non-structural carbon compounds (NSC) derived from glucose play many roles in plant functioning, not only as sources of catabolic energy. Besides their role as substrates for plant defense compounds, carbohydrates are the building blocks for structural biomass and serve also as signaling substances for the genetic regulation of metabolic processes like photosynthesis or respiration (). Also, sugars are important for controlling osmotic cell pressure to prevent tissue desiccation and to maintain physiological functioning under decreasing water availability (). Hence, severe reductions in carbohydrates not only influence plant catabolism but plant functioning in general and, in particular, the hydraulic functioning.

There are many potential interactions relating severe reductions in NSC (i.e. the lack of ‘free’ carbon compounds) to the plant water balance, for example xylem and root growth, osmotic regulation or xylem embolism repair. Observations of xylem recovery from large loss of hydraulic conductivity after drought have initially been explained by basal area growth, i.e. replacement of embolized vessels with new functional ones (). Also, plants may overcome water deficits by allocating carbon to root growth to maintain a functional equilibrium of the root:shoot ratio under drought conditions () or to mycorrhizal hyphae allowing exploring greater soil volumes (). Moreover, recent theoretical advances show that embolism may be repaired with water inflow from surrounding functional vessels and this inflow would be driven by an osmotic gradient established via importing low molecular-weight sugars into embolized conduits (; ). However, methodological artefacts during conductivity measurements may yield spurious evidence for embolism repair (; ) and the prevalence of xylem refilling in trees may be greatly overestimated (; ). On the other hand, Thorsten Knipfer presented during the 2015 Xylem International Meeting in Bordeaux experimental results showing that embolism repair in grapevines, observed via X-ray microtomography, was related to the presence of carbohydrates in xylem parenchyma cells. While such results have not yet been shown for tree species (Knipfer, T, personal communication), evidence from a variety of drought manipulations in potted trees suggests a linkage between xylem vulnerability and xylem carbohydrate content (Adams et al., in preparation) and is hence supportive of a similar mechanism acting in trees. The fact that trees store substantial amounts of NSC in parenchyma cell in the vicinity of xylem vessels () also suggests a potential functional role for the maintenance of water transport. However, given the lack of empirical support for a functional linkage between xylem carbohydrates and hydraulic function such suggestions are still rather speculative (Fig. 1).

Carbon starvation - does it exist beyond theory?

Carbon dynamics during starvation has so far been investigated only in cell cultures, excised tissues or shaded herbaceous plants (e.g., ; ; ; ; ; ). Experimental studies on drought-induced tree mortality are rather inconclusive with respect to carbon storage changes. Carbohydrate concentrations sometimes decline (e.g., ; ; ) and sometimes increase during lethal drought (e.g., ; ; ) while HF (measured as substantial loss of branch conductivity) has been observed in many other studies (e.g., ; ; ). Moreover, very few investigations have been carried out that were able to partition drought effects on carbon assimilation from drought effects on a tree’s capacity to translocate stored carbon from sources to sinks (). Declining plant hydration during drought negatively affects phloem transport either via phloem viscosity buildup or reduced phloem cell turgor ( ) and impeded carbon translocation may be yet another causal mechanism of drought-induced tree mortality (). Only two studies have addressed this mechanism explicitly and showed that phloem transport failure may indeed be responsible for drought mortality (; ). Impeded carbon transport across plant tissues may be causing different mechanisms to operate in different plant tissues and may cause HF to occur in above-ground tissues while belowground tissues die from CS (; ). How such processes interact with other changes in environmental conditions, such as elevated temperature, has so far only been investigated under controlled experimental conditions. Such studies show that elevated temperatures speed up plant carbon expenditure by increasing respiration rates () and push plants faster into a negative carbon balance () and could – likely – cause or hasten CS. However, elevated temperature also increases water vapor pressure deficit and hence decreases xylem water potential thereby yielding a greater risk of HF. Such interactions may explain why experimental drought manipulations of potted plants indicated a prevalence of HF as mortality mechanism while reduced carbohydrate concentrations were common but not universal with mortality (Adams, in preparation). 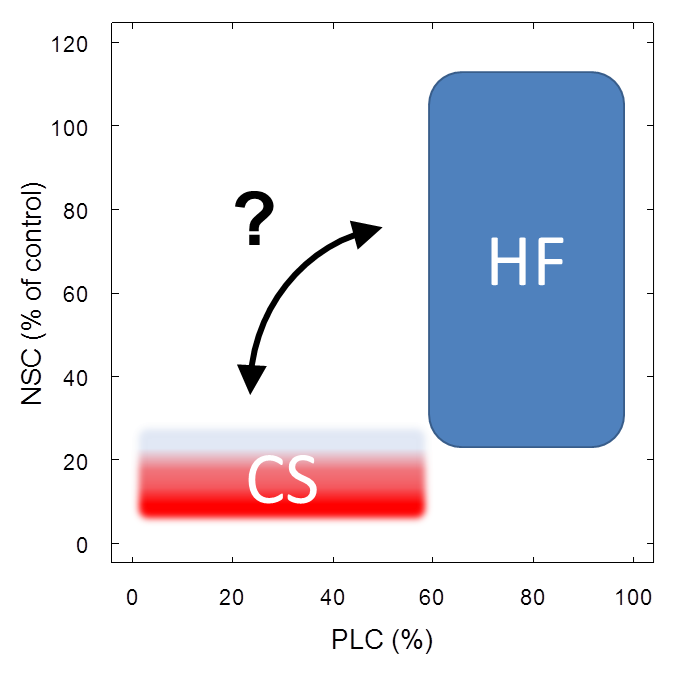 Figure 1: Working definitions for carbon starvation and hydraulic failure. Carbon starvation is defined as ‘depletion’ (compared to control trees) of carbohydrate pools. Minimum levels of carbohydrates may vary across plant types and even across plant tissues but are currently unknown (indicated by fuzzy shape). In contrast, thresholds for hydraulic failure (loss of conductivity) also depend on plant type and other factors but the range of thresholds is comparably well defined (indicated by clear shape). Interactions between minimum carbohydrate levels and hydraulic function, like carbohydrate-mediated embolism repair (arrow), are still not well understood and require further investigations.

Carbon starvation - are we chasing a myth?

There are still many unresolved questions with respect to tree carbon metabolism during drought and simple measurements of NSC concentrations may not be very insightful with respect to the tree carbon balance (). Carbon starvation can clearly not be defined as a complete depletion of NSC pools, as starvation in mammals occurs before blood sugar levels are down to zero (). Also, some NSC may be sequestered in woody tissues and are likely not be available for plant metabolism (). While thresholds for HF are well defined and have been reported for both conifers (e.g., ) and angiosperms (e.g., ; ) minimum thresholds of NSC concentrations required for survival are currently unknown and this prevents defining useful working definitions for CS (Fig. 1). Methodological issues in measuring carbohydrates in plant tissues still prevent us from accurately determining absolute carbohydrate concentrations () and trees may shift carbon catabolism away from carbohydrates towards lipids during carbon limitation (; ). Hence carbohydrate concentration, often assessed in studies on tree responses to drought, may be elusive and misleading.

Future research should focus on the role of NSC, including lipids, in key plant tissues like meristems that are essential for regrowth after disturbance and for plant survival (). As long as the functional roles of NSC in such key tissues are not clearly identified and addressed in focused studies, any attempt to refute the existence of CS during drought-induced tree mortality will be premature and scientifically unsound.

Acknowledgements : this opinion paper is based on a keynote talk I presented at the Xylem International meeting, held in Bordeaux on Sept 7-9, 2015. I thank Hervé Cochard, Sylvain Delzon and José Torrez-Ruiz for inviting me to the meeting and all other participants for insightful and interesting discussions.