There is evidence that recently occurring top dieback of Norway spruce (Piceaabies(L.) Karst.) treesin southern Norway is associated with drought stress. We comparedfunctional wood traits of20 healthy looking trees and 20 trees with visual signs of top dieback. SilviScan technology was applied to measure cell dimensions (lumen and cell wall thickness) in a selected set of trunk wood specimens where vulnerability to cavitation (P50) datawere available. The conduit wall reinforcement ((t/b)²) was a good proxy for P50. Cell dimensions were measured on wood cores of all 40 trees; theoretical vulnerability of single annual rings could bethus estimated. Declining trees tended to have lower (t/b)² before and during a period of water deficit (difference between precipitation and potential evapotranspiration)that lasted from 2004 to 2006. The results are discussed with respect to genetic predisposition.

In southern Norway, recently occurring top dieback in 40-50 years old forest stands of Norway spruce (Piceaabies(L.) Karst.) is thought to be associated with climatic extremes (). In this region, the period between 2004 and 2006 was characterized by high water deficits during the growing season, estimated as the difference between the cumulative precipitation and the potential evapotranspiration (see Fig 1 in ). During this period, trees with symptoms of top dieback (Fig. 1) showed lower intrinsic water-use efficiency that is associated with increased stomatal conductance () and produced wood with lower density, indicating higher vulnerability to cavitation ().Functional traits for estimating hydraulic vulnerability gain increasing importance as screening tools because hydraulic experiments are labour intensive or prone to errors (). In this study,weextend an existing dataset () with tree samples and derivefunctional traitsfor hydraulic vulnerability from tracheid dimensions assessed by SilviScan technology(). Thereafter wedocument how these proxieschanged over the years in20 healthy looking and in 20 declining trees in order to learn more about the predisposing factors for top dieback in Norway spruce in southern Norway. 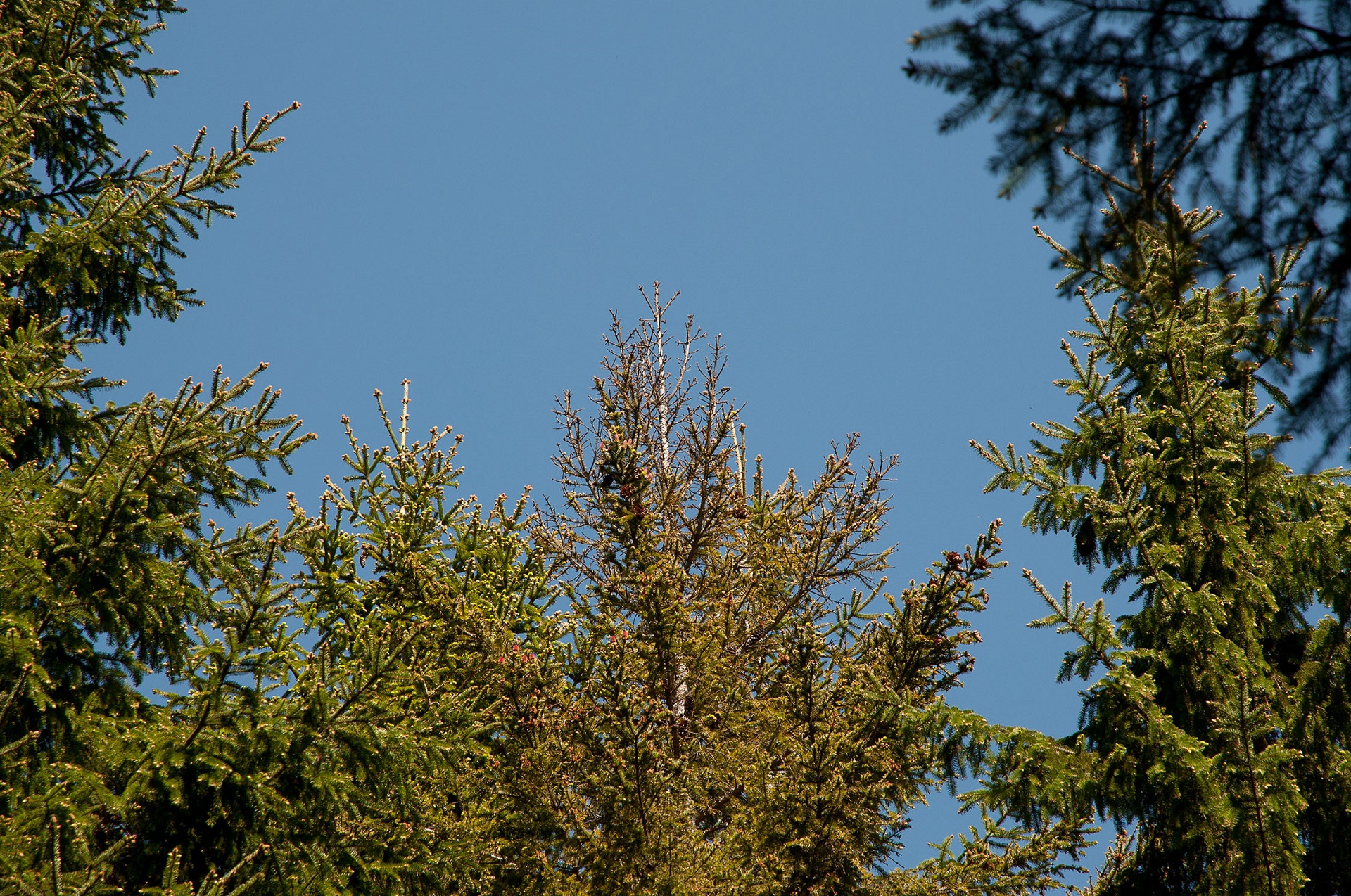 Ten healthy looking trees and ten trees with visual signs of top dieback such as dry tops and needle yellowing in the top (Fig. 1) were selected in Sande (Lat. (N) 59°35’, Long. (E) 10°12’)and Hoxmark (Lat. (N) 59°40’, Long. (E) 10°45’), respectively (n = 40 trees). For a previous study (), 24 trees (6 symptomatic and 6 non-symptomatic trees per site) were harvested in order to assess vulnerability to cavitation (P50) of the trunk wood by means of the pressure collar technique (). Wood cores taken at breast height and small wood beams, where P50data were available (), were analyzed with SilviScan technology. Wood density, radial- and tangential tracheid diameters and wall thickness were thus available in 25 µm radial measurement steps. For each single annual ring, a conduit wall reinforcement, i.e. wall (t) to lumen (b) ratio, was calculated as (t/b)² (). The conduit wall reinforcementwas not derived from the whole ring dataset but from wood with a density < 700 kg/m³ that comprises early wood and transition wood but not latewood ().

After 2005, height and radial incrementsshowed different trends in trees with symptoms of top dieback compared to healthy looking trees (Figs. 3a-b). Before 2004, symptomatic trees investigated in our study produced slightly higher radial increments than healthy looking trees. The differences were however not significant.After 1999, (t/b)²was lower in almost all annual rings of symptomatic trees (Fig. 3c); thus before, during and after a period with water deficit (2004 – 2006). In 2000, the difference was statistically significant. Steadily increasing (t/b)² after 2006, resulting in a higher (t/b)² of symptomatic trees in 2010, can be interpreted as a reaction to stress. 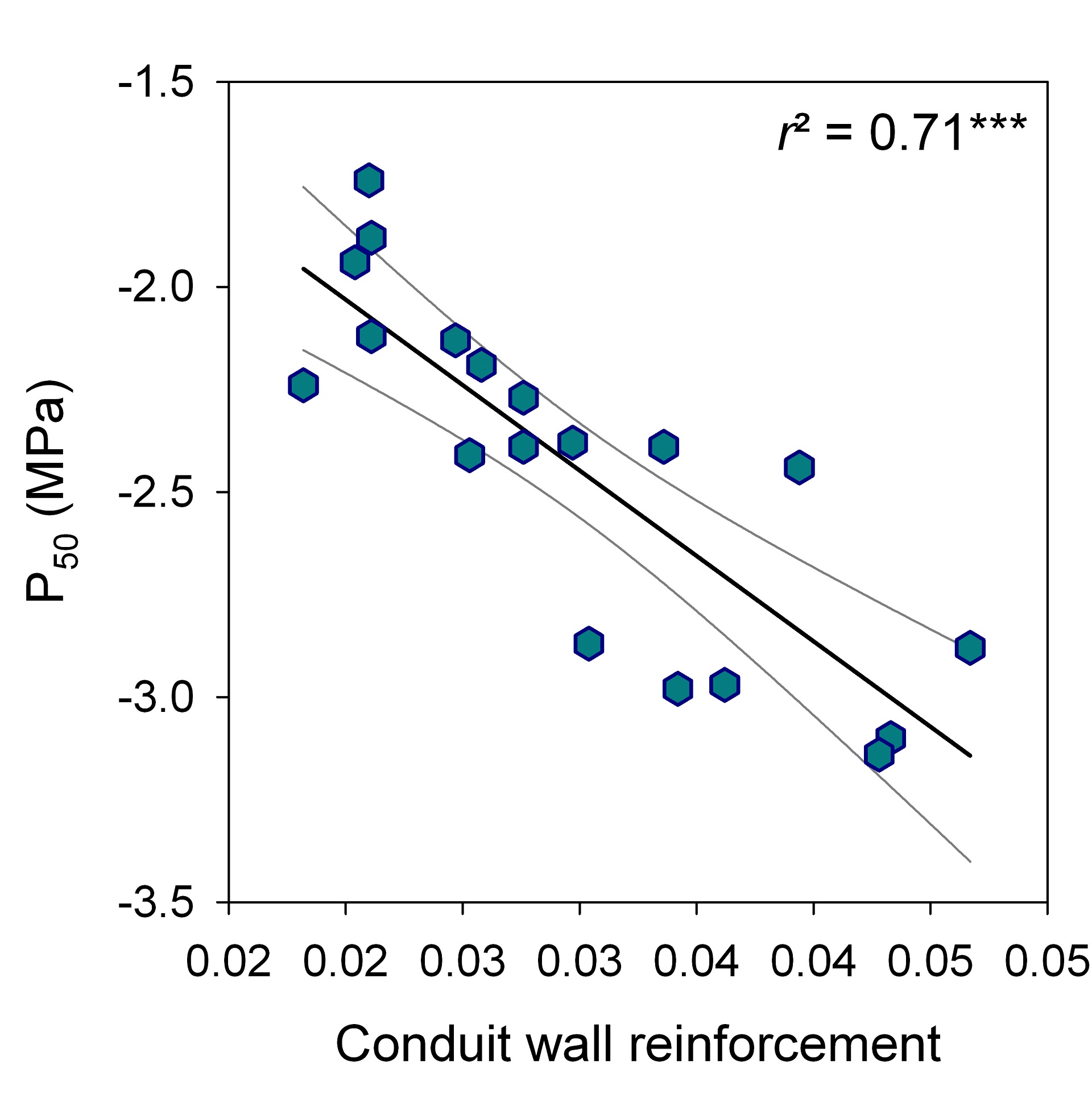 Producing wood with lower (t/b)² during periods of sufficient water supply can be a risky investment regarding hydraulic safety for Norway spruce trees. This“strategy” can lead to lower survival prospects under the impact of an extreme sudden drought because this species uses at least ten annual rings for axial water transport (). Due to irreversible embolism induced by drought stress (), the hydraulic conductivity might get lost in more vulnerable annual rings. This can lead to an impairment of the water supply of the crown andthus to reduced growth. In addition, trees with top dieback tended to spend water; they had a predisposition to less strict stomatal control. Trees with both characteristics can most likely not cope with several drought periods during subsequent years ().

Proxies for P50 can be useful tools to screen for provenances or individuals with higher hydraulic safety (). Published relationships between t/b ratio and P50 are much strongerwithin a given species (e.g. ) than across conifer species (e.g. ). Strong relationship between t/b ratio (thus (t/b)²) and P50within a tree of a given species exist due to the extremechangesof P50and thus t/b or tracheid lumen diameters () along a conifer trunk and the variability in P50between different plant organs (). This implies smart sampling strategies: in order to perform reliable comparisons between individuals of the same species, sapwood for hydraulic testing or for determination of functional proxies shall be collected from a given plant organ and from annual rings of comparable age (i.e. juvenile versus mature) at the same (relative) tree height.

Wood quality traits such as density (and most likely (t/b)²) are highly heritable in Norway spruce. Recently, found thatearly selection for wood density is highly effective from rings 6–7. Starting at that age, selecting individuals for higher hydraulic safety in trunk wood could be possible. However, trunkwood safety covers only one aspect of drought sensitivity related to hydraulic architecture (see ) and selected trees must be tested for their hydraulic performance in field experiments. In species such as Norway spruce, wood density is genetically negatively correlated with growth (). Thus, when selecting Norway spruce trees for higher hydraulic safety and/or more strict stomatal control, reduction in growth ratemight have to be taken into account. 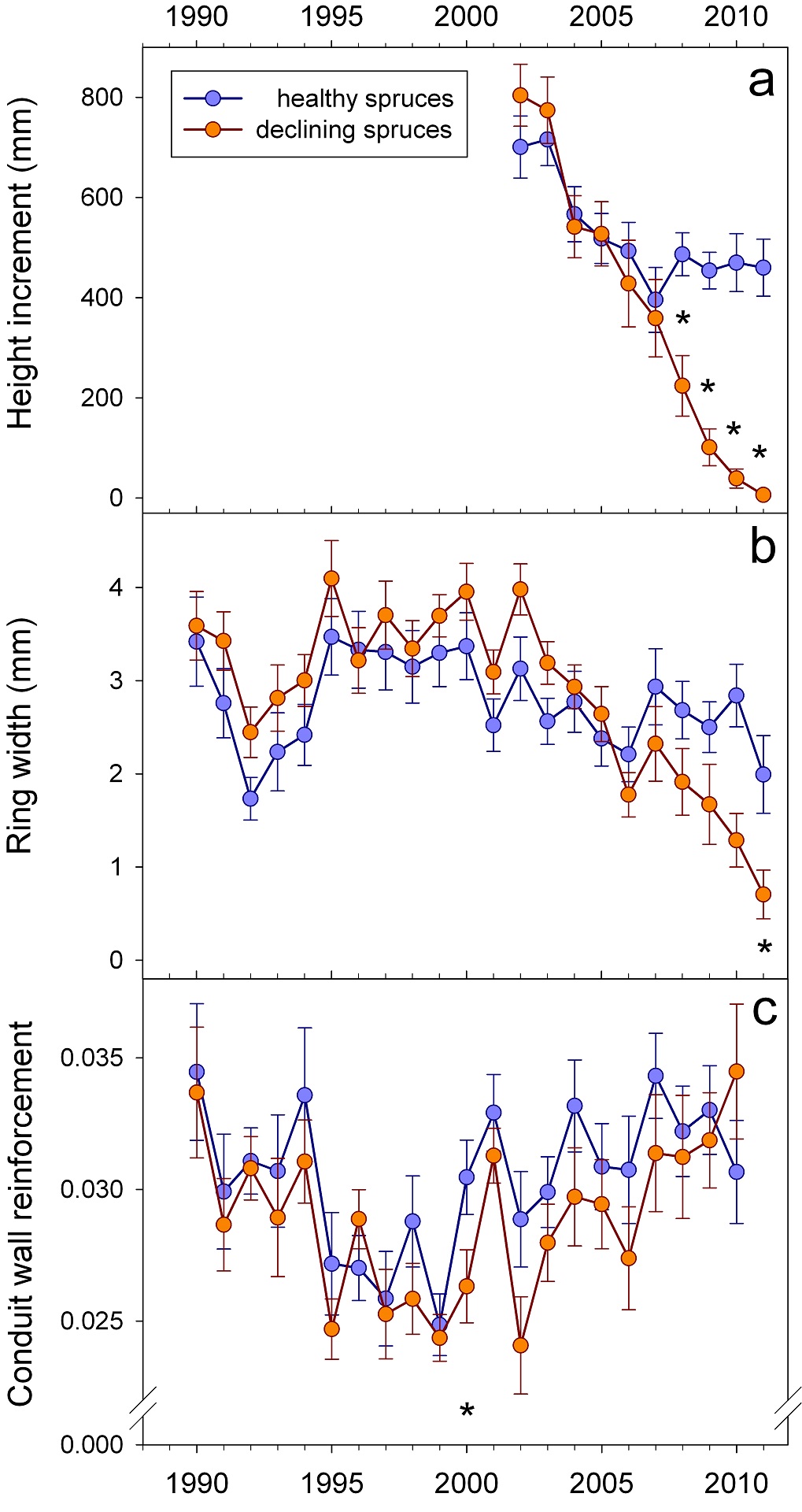 Figure 3: Time course of height increment (a), radial increment (b) and wall/lumen ratios of earlywood (c). Significant differences are indicated by “*”.

Acknowledgements : this study was financed by the Norwegian Research Council, by Skogtiltaksfondet, six regional funds in Norway (Fylkesmannen), by the Austrian Science Fund FWF (V146-B16) and by the CZ Ministry of Education (No. 6215648902). This work has been carried out under the framework of the COST FP1106 network STReESS.